Most of today’s cleaning products will fall into one a few basic categories, and while each has its purpose and place. When dealing with natural stone, terrazzo, concrete or grout some are better than others, and some are simply damaging.

Solventbase cleaners are designed to use a solvent to dissolve the material on the surface. The issue here is that as the solvent evaporates it drops the dirt, redepositing it as a film across the surface, unless wiped up with a rug or mop bucket.

Acidic cleaners have been used since the Roman times, with vinegar being the most commonly recommended. Acids will attack marble, travertine, terrazzo and concrete surfaces dissolving the CaCO3 (Calcium Carbonate) content and leaving a white spot in its place, or simply evenly dulling the surface. On marble a spot of vinegar will slowly eat its way into the stone leaving a distinct white mark when it is done. (A fun experiment, but a damaging product, as the solution requires the surface to be rehoned and polished which is not an inexpensive process, but is better than replacement. Acidic cleaners are safe on ceramic and porcelain tile, but not recommended for grout. Acidic cleaners can leach the color dye from the grout, and in fact often they are credited with cleaning when in effect the lightening effect is more along the lines of bleaching.

Abrasives such as Comet are great scrubbing aids for difficult built-up dirt provided you are not working on a soft delicate surface such as marble. Aggressive abrasives can scratch and dull the stone. That said, there are products on the market engineered for such applications which use an abrasive tailored to be harder than the soap scum or other dirt being removed by softer than marble so it fractures into a harmless powder when pressure is applied to the stone (at which point it has already cut through the soap scum). MARBLELIFE Soap Scum Remover is such an example.

Surfactant based cleaners are exceptional emulsion cleaners and are particularly good at removing oils. As oil and water do not want to mix, removing grease and oil can often be a challenging issue. If you have visited your favorite restaurant and encountered a greasy slippery floor, who have experienced the downside of a poor cleaner which has simply spread the problem without removing it. A properly engineered surfactant based cleaner will surround the oil molecule with so many surfactants that the oil can no longer see the water. This is accomplished because the surfactant has two different parts. One part likes to dissolve into oil, while another to water, as such these products will cover the oil but allow it as a particle to be dissolved and carried by the water. This makes it easy to remove grease and oil based contaminants from a surface. MARBLELIFE’s line of Marble, Granite and Tile cleaners employ such technology. In fact, they can suspend a droplet of oil in suspension for more than 9 months (another fun experiment to try), certainly sufficiently long a period to capture the oil and lift it off your floors. If you have heard the term squeaky clean, this is the prime example of what that means, as your surface is literally squeaky clean.

Residue leaving cleaners are another problem. Many glass cleaners include a small amount of wax designed to fill in scratches for better glass clarity. Unfortunately on a floor or counter these wax deposits adhere and create a dulling film which can require a stripper to remove. Poor oil dissolving and suspending cleaners are major contributors to the greasy floors discussed above. MARBLELIFE’s cleaners are so effective, if we made them with normal tap water in most counties they would automatically clean the water capturing impurities in sufficient number to be visible. Our products are made with refined water so as to maximize the cleaning potential when you receive it.

If you are looking for cleaners that have been engineered to clean effectively, removing oils and build-up, without depositing a film, leaving a healthy squeaky clean surface, you want to try MARBLELIFE Cleaners on almost everything from your stone and tile to wood. metal, glass and mirrors. You will be truly pleased with the results. We are, but then we are biased. Our more than 100 craftsman around the country use it daily, because it works and it makes their lives and jobs easier, we hope you will try it too.

Problems Using Acids
Multi-Function Product Myths
What Are Others Saying?

Read Our Reviews
Before and After

View Our Before and After Galleries 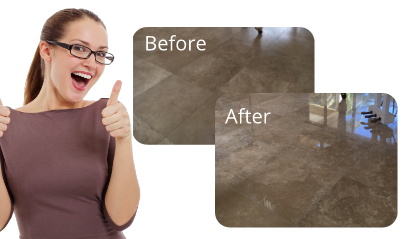 Used by our MARBLELIFE® stone craftmen 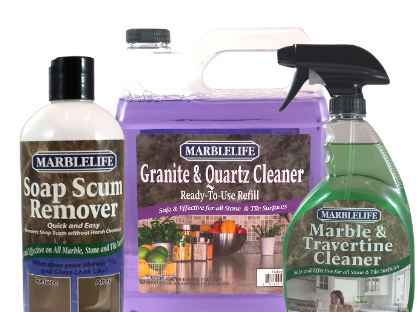